Hello, I'm Jules Rawlinson and I design sounds, visuals and interactions and perform with live electronics. I'm Programme Director of MSc Design & Digital Media at the University of Edinburgh

My recent practice-led research output addresses action, agency, aura and spectacle in electronic music performance, with a specific focus on small improvising ensembles. The aims of this research were to develop a framework for graphical representations of multiplayer sonic/musical interactions in performance by exploring data visualization and machine listening of shared musical gestures in performance. The main output from this research is UniSSON, a suite of software tools developed with Marcin Pietruszewksi (with input from Owen Green and Dave Murray-Rust) that presents a real-time multi-temporal and multi-resolution view of sonic data across a number of sound-based parameters in accessible ways, which contributes to audience engagement and collaborative performance. There's an overview of the software below, audio starts at 45 seconds! If you'd like to try it (Mac only sorry), please get in touch via email. Raw Green Rust will perform with the software at Experimenta Heilbronn Beyond Festival

Following selection of his Muriel Spark suite by Made In Scotland, Raymond MacDonald brought old friends and new ones together for two dates at the intimate and atmospheric Pianodrome

As usual I was sampling and processing the band, plus adding scratching/noises, and also I revised/revisited my visuals, adding much more motion and again exploring a mid-century aesthetic in a 21st century generative way.

With 6 projectors and playing in the round, we were able to fully integrate the visuals for the first (and hopefully not the last) time, and I chose to project directly onto the pianos.

Was delighted to be accepted for xCoAx 2019 to perform my graffiti piece SKR1BL. SKR1BL is an audio-visual composition for solo laptop performer with gestural controllers, e.g. graphics tablet. The work is part of a wider study on the use of graphic notation in live electronics to create a body of work that falls in the gaps between improvisation and repertoire. Here's an action shot courtesy of xCoAx:

The graphics tablet is used to follow the overall form of the tags as an interface to sample based DSP processes in a MaxMSP environment, and re-scribing the gestures contained in the tags. The graphics tablet and other controllers are used to trigger and scan material, which is subject to further processing and manipulation in a manner reminiscent of both early tape works and modern turntablism.

I was very pleased to have another work selected for Cryptic Nights as Cathie Boyd, Claire Moran and Co. are great to work with and Cryptic continue to cultivate, curate and commission fresh, creative work in Scotland and beyond.

Building on the triptych work I'd developed for the installation, this instance of Interval and Instance was performed with three screens and multichannel audio. I added some additional material and worked on really articulating the character of both audio and video material through contrast and counterpoint.

Myles Oakey kindly wrote a very detailed review and profile of the eventand Keira Brown reviewed the event for The Fountain.

Interval and Instance - Trailer from Pixelmechanic on Vimeo.

My Interval and Instance work for EIFF was remixed and reimagined as a triptych video installation with multichannel audio. This re-presentation of the work explored reconfiguration, juxtapositions and layering of material and includes a 'fixed' live performance, recorded in a single take at the Reid School of Music.

My colleague Raymond MacDonald invited me to contribute live visuals and electronics as part of a new 40-minute suite of music inspired by the writings of Muriel Spark. The motion graphics I created take inspiration from mid-20th century design, specifically jazz covers by labels such as Blue Note, Saul Bass and also Spark's book covers, and explore clipping, rotation and blended layering. My live electronics included live sampling and looping, plus my usual assortment of scratching and granular techniques.

Following some meetings with Rachel Hosker at Special Collections at Edinburgh University, it was suggested that I should/could make a new work out of archival material from the pioneering scientific filmmaker Eric Lucey for inclusion as part of a series of events at EIFF focusing on a review of Lucey's work. I created a 45 minute long work for 'live cinema' exploring time and focus adding a solo live electronic score and sound design.

The performance examines speed, motion and scale in film and sound. The soundtrack makes use of extensive layering, time-stretching and time-compression, extreme pitch-shifting, physical modelling and frequency carving to create unexpected points of audition which offers audiences a detailed and immersive audio-visual experience that incorporates spectralism, minimalism, modular synthesis and granular detail that support and draw attention to the visual character of the films.

Was delighted to be invited to perform twice at Sonorities Festival 2018 Belfast. Rebreather with Franziska Schroeder and reworked live visuals by Dara Etefaghi was selected to open the festival and Raw Green Rust, my laptop trio with Dave Murray-Rust and Owen Green played a fun and (at times) frantic set with more than a few false endings, which will hopefully appear on Radio 3's coverage of Sonorities later in the year.

A fantastic week with Lauren Hayes, Marcin Pietruszewski and others working in residence at Arizona State University to produce two new multimedia performances including sound, visuals and dance as part of LLEAPP 2018. Mapping visuals to the floor created new opportunities for interaction and dialogue with movement. Marcin and I also got an opportunity to present our work in progress on Unity Supercollider Sound Object Notation (UNISSON) as part of ASU's Digital Culture Series

Following our performance at Siren, my ECA colleagueYati Durant and I were invited to perform PixiDust at Seeing Sound Symposium, Bath Spa. We'd developed some new approaches to working with loops of video including feedback and looping techniques. The levels were quite hot into PixiVisor leading to some dropouts and eventual failure of PixiVisor, but overall it was a rigorous and exploratory performance.

My ECA colleagueYati Durant and I collaborated on a new audiovisual project, PixiDust, for the SiREN Arts & Digital Practices Conference organised by PhD students from Edinburgh College of Art. PixiDust is a structured improvisation that explores opportunities for integrated audiovisual performance through hybrid analogue/digital video synthesis. Images are encoded to an audio stream using the cross platform PixiVisor software and subsequently processed in the analogue domain before summing to a final analogue to digital audio-video conversion.

A chance meeting with Franziska Schroeder at Belfast City after Sonorities led to a new work developed via email and Skype, and presented as an audiovisual trio with live visuals by Dara Etefaghi. "The saxophonists materials become the basis for the visual artist who uses these subtle sounds to inform and drive his response, tracing the gestures of the performers breath. Live processing of the breath sounds allows us to enhance, as well as to counter the performative materials through filtering, dispersal and accumulation." 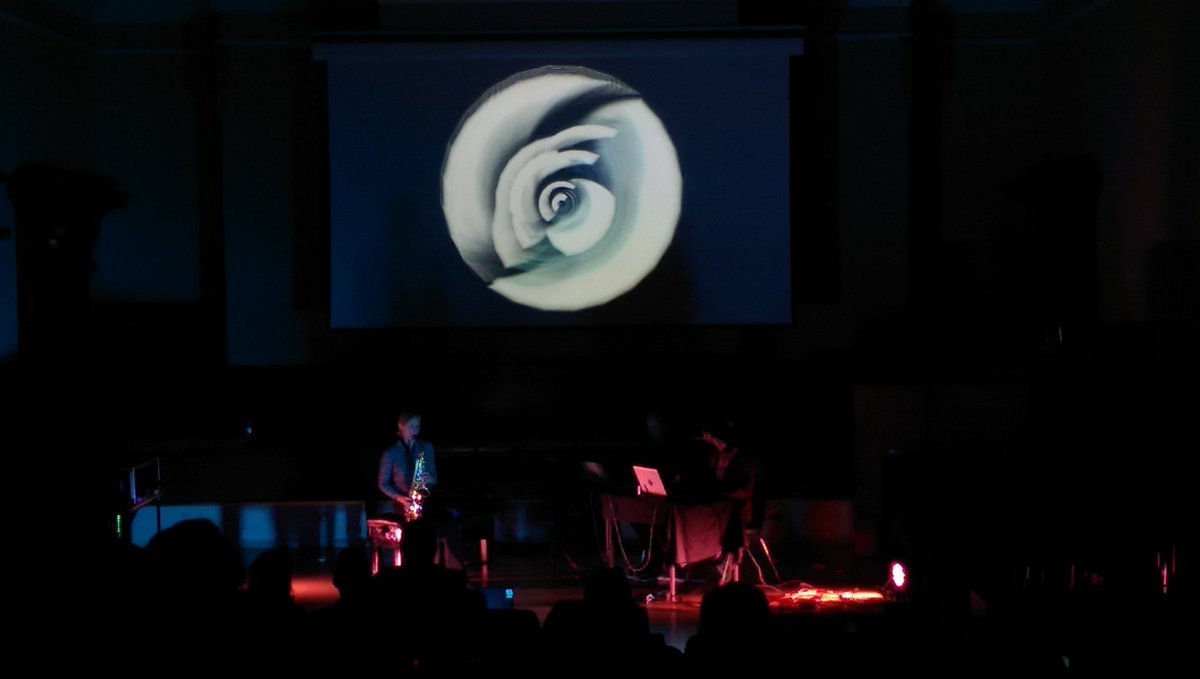 Re-breather from CAHSS Webteam on Vimeo.

After showing SKR1BL at ICLI2016, I was very pleased to be selected for Black Box concert at Sonorities 2016, Belfast 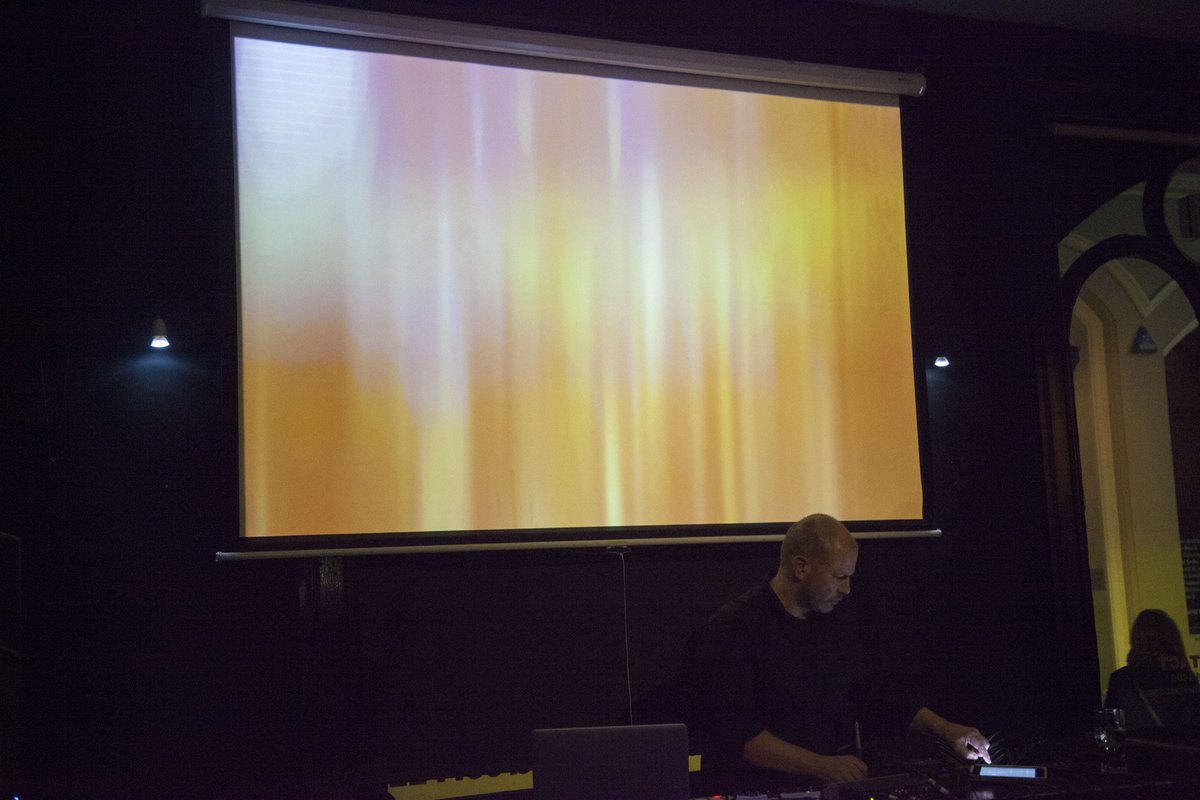